Updated: December 16, 2013 | Feedback
News > Selakovic: Process of judicial reform to be sped up

Selakovic: Process of judicial reform to be sped up 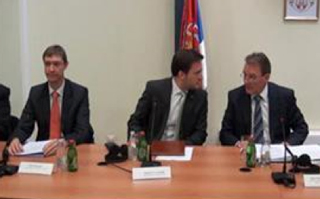 BELGRADE - Minister of Justice and Public Administration Nikola Selakovic said on Monday that Serbia intends to further speed up the reform of its judiciary in the process of its EU accession.  At a conference held at the High Judicial Council ahead of the start of work on a functional analysis of the judicial system in Serbia, Selakovic said that the rule of law is a challenge for the Republic of Serbia, and that the reform of the judiciary is one of the most important areas.  Selakovic also voiced hope that this will be the final analysis of the Serbian judicial system before the opening of negotiating chapters 23 and 24 as part of Serbia's EU accession talks.  The minister recalled that the 2013-2018 National Strategy on Judicial Reform and the Action Plan for its implementation define the measures and steps Serbia will take.  The final analysis of the judiciary's work is supported by the World Bank - a neutral partner in the talks that has significant experience in providing technical support, Selakovic noted.  The final analysis needs to show us the current situation, but also offer answers and solutions for improving the Serbian judiciary, Selakovic said.  Dragomir Milojevic, the president of the Supreme Court of Cassation and the High Judicial Council, believes that the final analysis will contribute to a realistic overview of the current situation in Serbia's judicial system, and serve as a basis for developing guidelines to provide citizens with quick and equal access to justice.  "Our goal is to create an independent, responsible, professional and efficient judicial system - to create judicial excellence," Milojevic said.  The conference was also attended by Serbia's Deputy Public Prosecutor Tamara Mirovic, World Bank representatives in Serbia, experts to be in charge of analysing the judicial system, as well as the heads of Serbian courts and prosecutors' offices.