i. Use of Standardized Forms, Templates and Checklists

ii. Extent of an Implementation Gap (the ‘Law on the Books’ vs. the Law in Practice)

iii. Consistency in the Implementation of Law and Perceptions of the Quality of Judicial Work 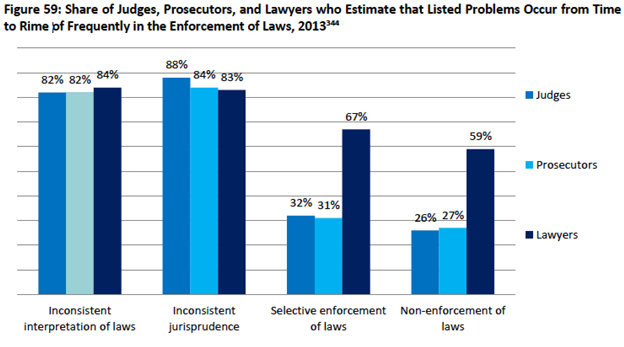 Abuse of office cases provide an example of a type of case that is particularly challenging to process. Stakeholders report that challenges arise due to a range of factors relating to the quality of laws, the efficiency of the courts, capacity and integrity, all of which affect the quality of case processing.

First, the law is not clear. The definition of a ‘responsible officer’ under article 359 of the Criminal Code has been loose and included both public officials and owners and managers of private companies. The definition of wrongful conduct is also loose, and encompasses anything from misrepresentation to fraud and corruption cases to embezzlement, inside trading and the operation of Ponzi schemes. Article 359 has thus been used as a fallback alternative charge in a large number of cases.

Second, necessary skills are lacking. The processing of white-collar crime cases requires sophisticated investigative skills, including forensic accounting skills, which are often lacking in prosecution or police offices. Further, many judges are not familiar with accounting concepts and have little experience in dealing with white-collar crime cases. Limited training has been provided. So, actors along the criminal chain find it difficult to engage with the complexity of the evidence.

Third, a feeling of inertia has developed. Judges report a level of discomfort in dismissing these cases, for fear that they may be perceived as unduly influenced or ‘soft on corruption’, and also express discomfort in convicting defendants of this offence. They report that they are unsure how appellate courts will react, so the better thing to do is ‘wait and see’. Prosecutors report a dislike of these cases, due to the above challenges, plus the low conviction rates. Defendants in these types of cases also tend to abuse procedure or cause delays for tactical advantage, and some may also engage in informal means to affect the process.

As a result, many of abuse of office cases become backlogged. For example, the Higher Court in Kragujevac reports that the majority of its backlog consists of article 359 cases. Among the backlogged cases is an emblematic group of cases of alleged fraud against professors and students at the Law Faculty of Kragujevac, which have been beset by a series of procedural delays.

In 2013, the Criminal Code was amended to create separate offences for public and private actors, but the implementation challenges remain.

iv. Use of Specialized Case Processing for Particular Case Types

In Zrenjanin, the relevant institutions have developed a simple and good practice to resolve this problem in family violence cases. With some support from CIDA, the Prosecutor’s Office in Zrenjanin brought together representatives of the police, public prosecution, centers for social work, misdemeanor courts, and others to organize weekly meetings to discuss all family violence cases in the jurisdiction. By coordinating their work, they’re able to avoid double charging to prevent violation of non bis in idem rights while also promoting the rights of victims and witnesses by ensuring that family violence does not ‘fall through the cracks’. This kind of inter-sectorial cooperation at the local level is inexpensive and easy to implement – strengthening, quality, efficiency, and access in the delivery of justice services in Zrenjanin.